I’ve been told that the only thing I post about nearly as much as my daughter is beer. Why disappoint?

This past weekend we had a great get together with a bunch of my MBA classmates and their significant others. 15 adults. 9 kids. Times have changed. To make sure we had enough time to actually enjoy each other’s company, a genius weekend attendee suggested we hire a professional chef. And like that, brunch, dinner, and dessert on Saturday were fully covered.

To fill in the gap between lunch and dinner, I decided to pull together a beer and cheese tasting for the crew. I’ve always paired my beer pretty well with food, but I never thought of it in sequence and for such a wide array of palates. I was super happy with the results.

Why? Don’t underestimate the cider and presume it to be sweet. What I love about this cider specifically is both the maturation as well as the oak barrel aging, both of which turn the cider into more of an oaky white wine than a pressed cider beer from apples. The complexity is still there and it makes for a great seasonal transition drink, between the crispness of Summer and the earthiness of Fall. In this case, you want a creamy cheese that doesn’t dominate your palate and that is complemented by the sharp bite of the cider. The truffle honey was added to complement the oak flavor imparted on the cider by the barrel aging process. The one thing I could have done was better manage expectations about the cider; as hard as I indicated it would taste more like a wine than a typical cider, it was hard for some to process. Regardless, the result was a great start to our tasting.

Also, I believe everything I just wrote above. If it sounds hokey, get off my blog. I wrote it after closing my eyes and reminiscing of the flavors. That pairing was legit! 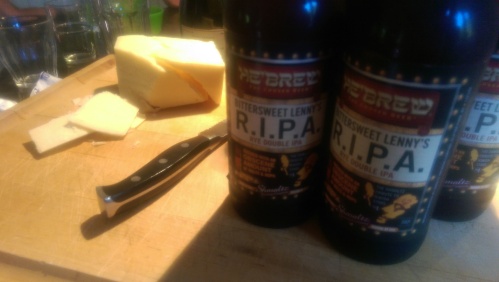 Why? IPA – strong on the palate. DIPA – stronger and hotter on the palate. Rye DIPA – game changer. I wanted to blast their palates and take them to an extreme of flavor. I debated the 90 Minute, the Maharaja, and even going Alesmith, but this felt right. Plus, I was able to nod to Rosh Hashana and Lenny Bruce with one bottle.  It’s a radical beer (per Schmaltz Brewing) and the right move. I’ve read that the Rye should have pushed me to a more peppery cheese but I went with one of my favorite combinations of a rich cheddar paired with an IPA. To balance out the hops and malt in the beer, I went for a 7-year aged Canadian. The aging process as I understand it firms up the cheese, concentrates the flavors, and allows the cheese to hold up well to the power of the Rye DIPA. A good cheddar brings with it a buttery, sweet, sharpness which needs a strong beer to mellow it, and vice versa. As advertised. Some people didn’t like either the beer or the cheese alone, but enjoyed them in concert. (Note: I loved the look of this cheddar as well. Every cut of the brick would chip off a piece larger than expected because of the cheese’s density and texture.) 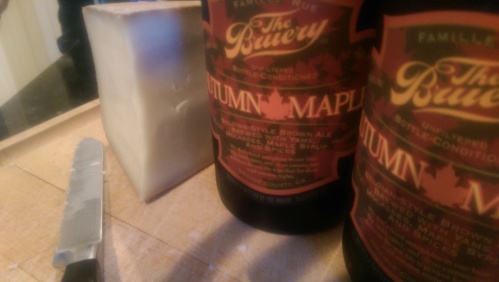 Why? If you haven’t had the Autumn Maple, stop, and go get it now. I think it’s as good a beer as The Bruery makes and there’s not much more time left to get it. With the Autumn Maple you’re drinking Thanksgiving. Nut Brown Ale with yams and maple syrup. It’s a beautiful thing and I feel like something that is this sweet should not be drinkable in such large quantities. But it is. The sweetness hits you fast but vanishes behind all the remaining flavors and before you’re finished enjoying what passed you’re back to your glass for more. There are some cheeses, IMHO, that pair really well with sweetness. Some say Brie, but I believe in many cases Brie becomes a vehicle for the fruit, adding some texture but little flavor complexity against strong competition. So in this case, I had to go sheep’s milk and the Pyrenees Brebis. I wanted butterfat. It’s that simple. I wanted everyone to taste the butterfat and have that lingering fat and oil on their tongue as they enjoyed the nutty base of the ale, followed by all that additional flavor. It’s not an easy cheese to like, as well, so I had to pair it with the most forgiving of beers for newer palates. 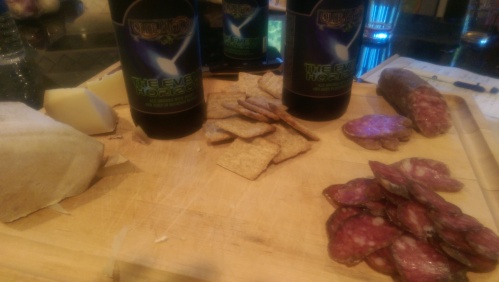 Why? Few things stand up to a BBA Stout like this one, and the chocolate covered bacon I tried to make didn’t turn out right. The Event Horizon is up there. It’s the beer I’ve experimented the most with on the pairing side because of the way they release this beer in Charlotte, NC — a full on breakfast that incorporates The Event Horizon flavors. It’s sets the mind rushing. I was originally going to pair this with the other cheeses as well, so people could get contrast and understand what beers do to cheese, and vice versa. But when our chef brought out the big guns on the sausage side it was a no-brainer. The flavors that come from malt and roast pair beautifully with cured meats. The bourbon finish of the beer and lingering heat also pairs well with the fat and salt associated with the cured meat. I recommend it.

I was happy with the pairing. I was happier to have shared with the Fuqua crew. Can’t wait to do it again. Maybe a harder push on the Fall Seasonal? Who’s up for it?

One response to “Trial & Error | Beer and Cheese Pairing in Newtown”